The Watermen’s Museum – A Must “Sea” in Historic Yorktown

We all know water is one of the essential elements of life. It waded its way into the history books as early as the creation of the Bible.  But did you also know that in Yorktown, Virginia, there’s a quaint, scenic, historical museum that documents the history of Chesapeake Bay watermen from pre-Colonial to modern times? 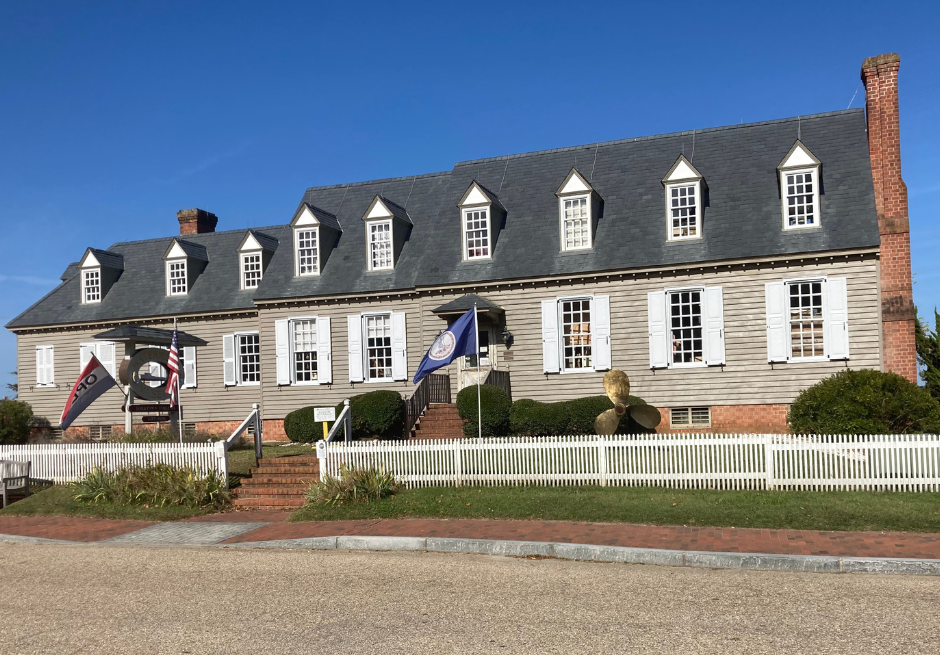 The Watermen’s Museum current location – coincidentally at 309 Water Street – wasn’t its first home. The Museum was founded in 1981 and initially occupied the buildings left behind when Hornsby Oil Company closed. In 1986, co-founders Marian Hornsby Bowditch and Nancy Laing Cole Laurier were responsible for acquiring the buildings and moving them from Gloucester. The main building is a replica of Colonial Williamsburg’s Raleigh Tavern.

Like many others in the Historic Triangle, the Watermen’s Museum is a living history museum.

Its indoor exhibits walk you through the timeline of people that made their living on water, including the Algonquin-Speaking People, European colonists, military and professional civilian sailors, and fishermen.

Artifacts demonstrate the tactics settlers used to build wooden canoes and other survival tools. The Museum also explains how some laws in the 16th and 17th centuries made it difficult to import and export goods. Model ship replicas, like the Hermoine, are displayed with historical facts surrounding their role in American history. A life-size replica of the Hermione made an appearance at Riverwalk Landing Piers in 2015.  The original 1779 Hermione ship was ferried by General Marquis de Lafayette to the United States in 1780. It allowed him to rejoin the American side in the American Revolutionary War, and remained in the York River area during the siege.

The Museum’s modern exhibits include the evolution of workboats and the importance they play in the local economy. In its newest exhibit, you can get a sense of how climate change is negatively affecting the Chesapeake Bay watershed. It features “The Resiliency Project,” which are three ceramic vases that explain the threats, hope, and solutions regarding human impacts on the environment.

The Museum's outdoor galleries include a working boat shop, the Yorktown Windmill, a performance stage, pier, and natural beach areas, which give students and adults the opportunity to experience the past through docent-led discussions. Other outdoor artifacts include a tobacco press, The Virginia State Navy Gunboat Henry, a stockyard and pillory, as well as a navy Coast Guard Lightship bell.

The Museum hosts school field trips, in which students are taught how to make canoes, burn logs, and experience maritime trades like rope making, blacksmithing, and woodworking. During the summer, they offer one-week pirate, archaeology, boatbuilding, environmental, and maritime trades’ camps for kids.

Musicians are also often docked on the Museum’s outdoor boat stage throughout the year to sing folk music and popular sea shanties to guests.

The Museum’s Carriage House – an event space overlooking the York River – can be reserved for weddings, birthday parties, or company retreats.

If you need a meditative place to relax, you can practice yoga on the first and third Mondays of each month. You can also have fun at their free monthly Folk Jams at 5:30 p.m. on the second Wednesday of each month in the Carriage House.

The Watermen’s Museum is open from April to December.

We encourage you to go “sea” it for yourself.

Check out our calendar for a list of upcoming events at the Watermen’s Museum.