The colonies declared independence from Great Britain on July 4, 1776. We are now less than a week away from the anniversary of that very significant date for America—one that for many has evolved over the years into a celebration that includes hot dogs, the beach, and fireworks. But let’s not forget how we got here. And more importantly, who got us here. 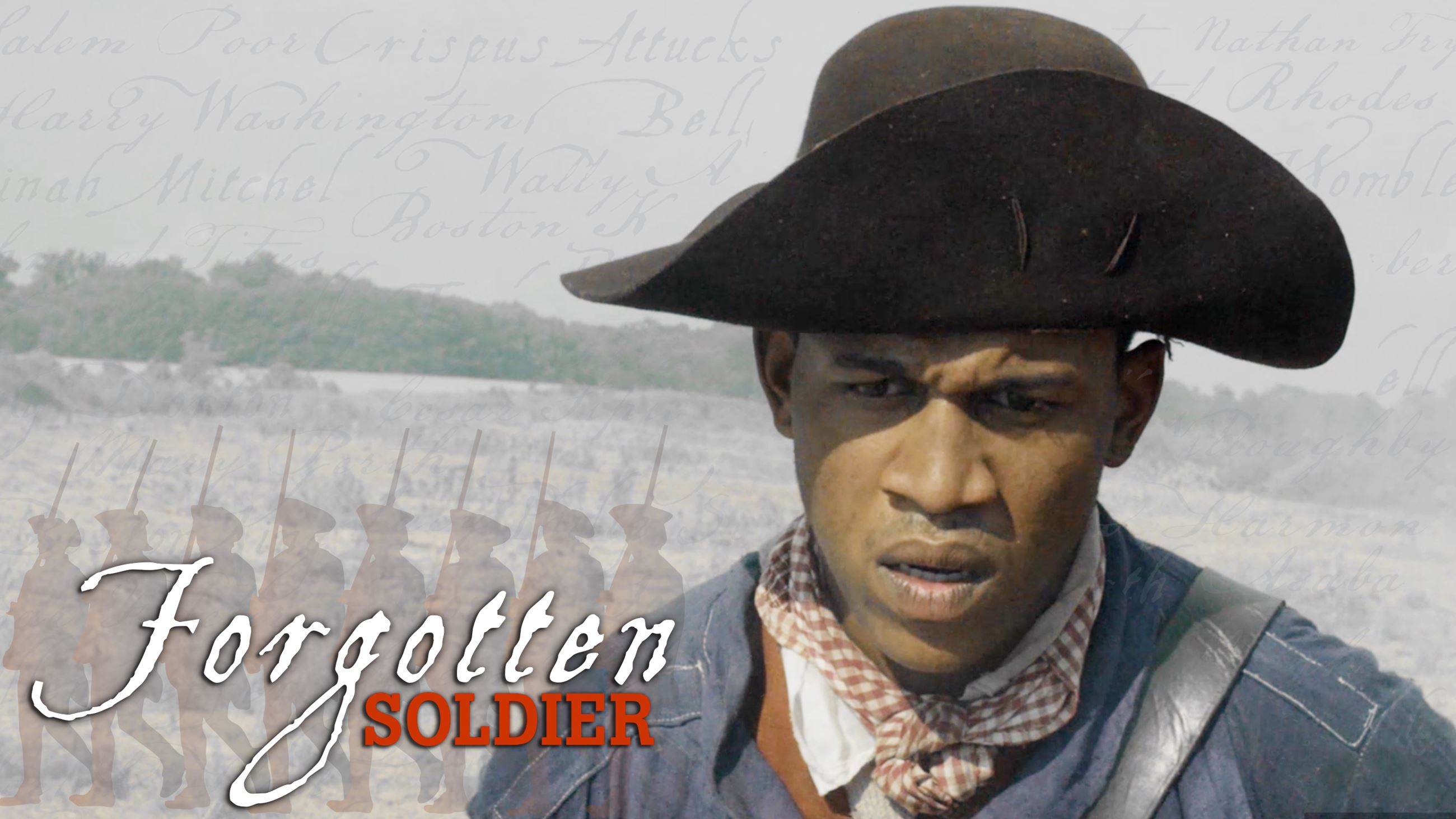 Staff members at the American Revolution Museum at Yorktown are busy preparing to officially open the doors of their newest exhibition Forgotten Soldier on Saturday, June 29, 2019. The goal is to challenge all of us to shift our focus when reflecting on this important beginning chapter of our nation’s history—one that reads very differently, depending on the color of your skin.

We were invited to join our local media for a preview of what will be a nine-month special exhibition held in conjunction with the 2019 Commemoration, American Evolution, which marks the 400th anniversary of the first recorded Africans in Virginia in 1619. 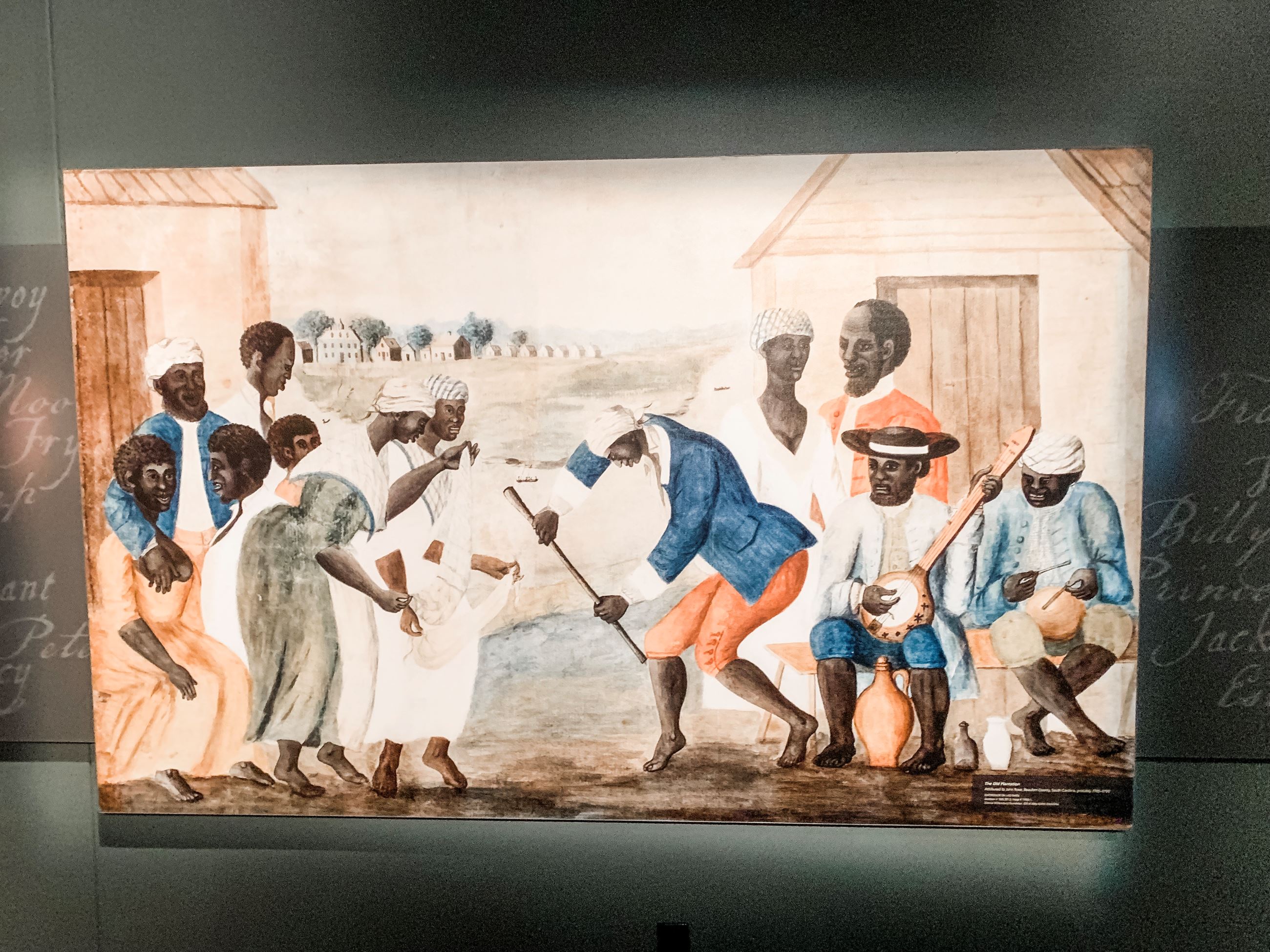 We got to see firsthand all the rare documents, artifacts, interactives, and compelling art that now fill this spacious 5,000-square-foot gallery and hear from curators, historians, and even the renowned artist whose sculpture is one of the centerpieces of this exhibition. 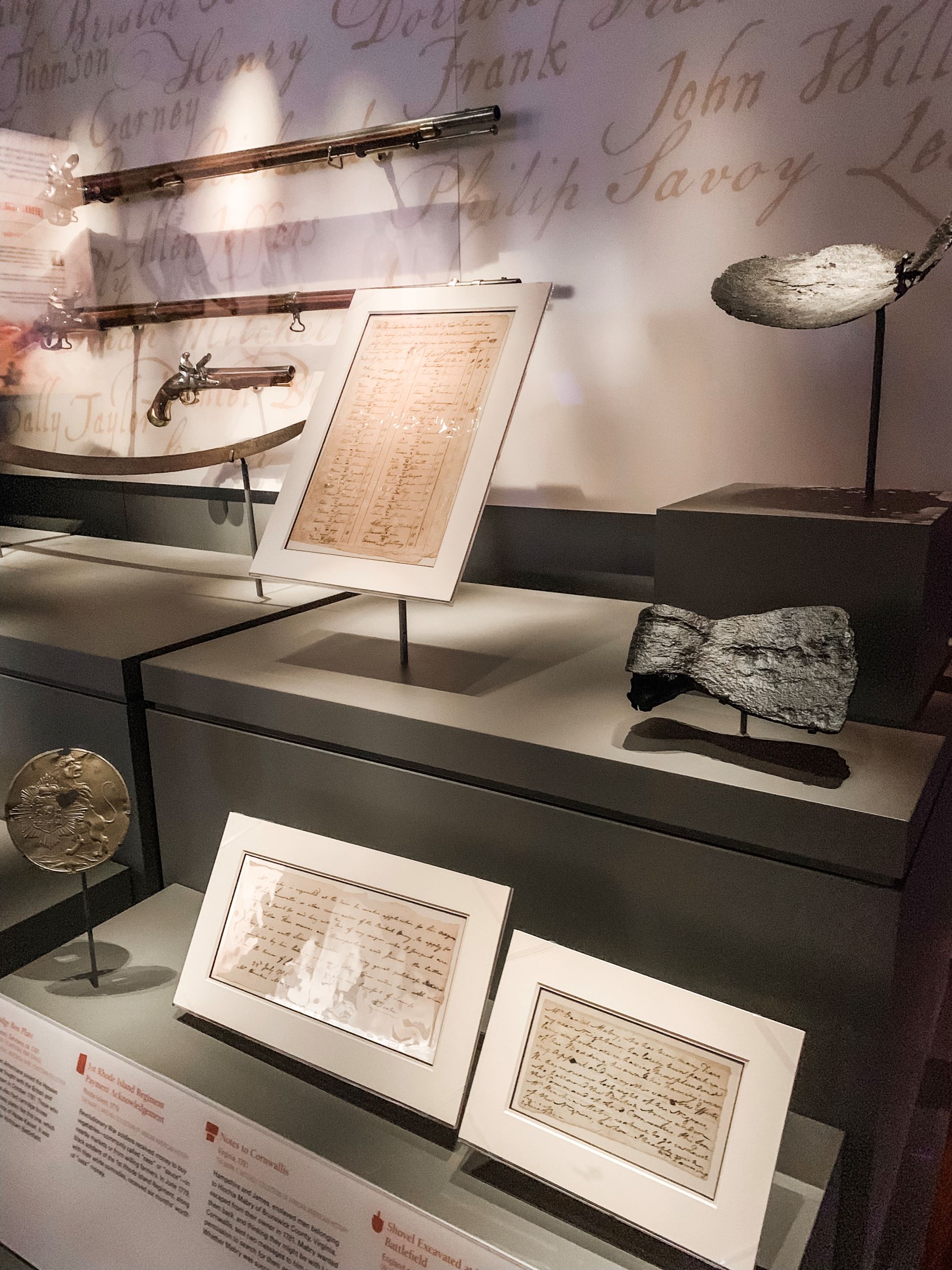 In fact, that’s where we’d like to start as we share this behind-the-scenes tour with you. Katherine Egner Gruber, Special Exhibition Curator, is excited about the Jamestown-Yorktown Foundation’s decision to incorporate contemporary art into an exhibit for the first time. “People learn in different ways and interact with content in different ways. You’re looking at the silhouette of George Washington and almost miss the African-American face in front of you,” she pointed out as we stood in front of this truly breathtaking work of art. 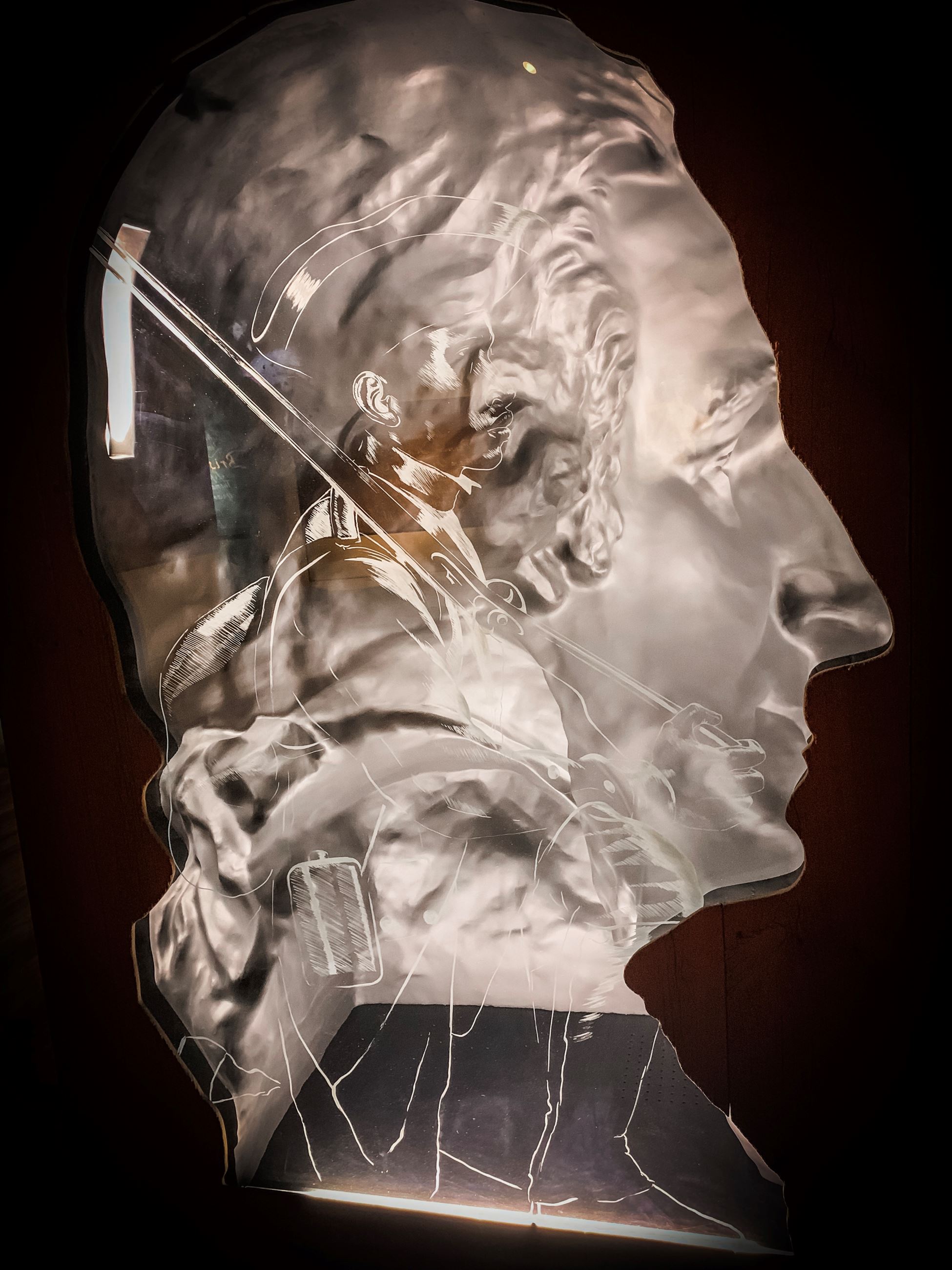 Titus Kaphar, the painter and sculptor who created this thought- and emotion-provoking piece, further reiterated his intent when designing this unique piece: “Those parts of the sculpture that are sort of that hollowed-out space, to me, make me think of all those people who look to our Founding Fathers for that inspiration... These black folks who heard through conversations, sitting beside the fire reading the documents… realizing  that they wanted that liberty as well. The black figure in the front is about just that – those forgotten soldiers – the ones that were there that participated, that for some reason, history had forgotten. So I think it’s important for us, and I’m trying in this piece, to find a way to speak to both of those things at the same time. And it is a struggle to separate what you’re supposed to be seeing, when… and that’s literally the point.” 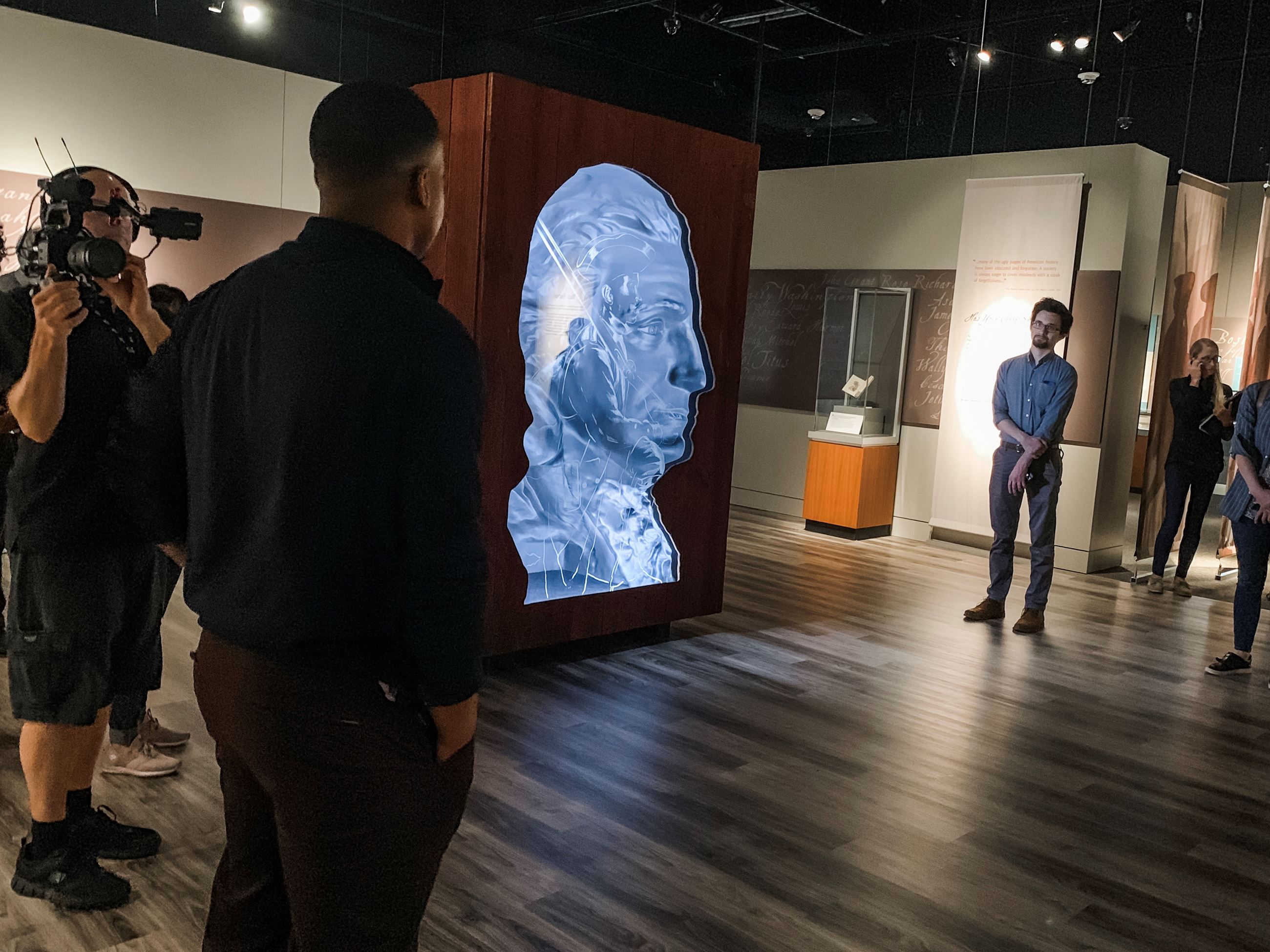 Kaphar also wanted to be clear that it isn’t his intent to neither demonize nor to deify General Washington or any of our Founding Fathers in this sculpture. Instead, he hopes to provide two different perspectives for reflection. “I think they are humans who made mistakes, who made really poor choices in some cases, and in other cases were so ahead of their time, it’s hard to believe.” 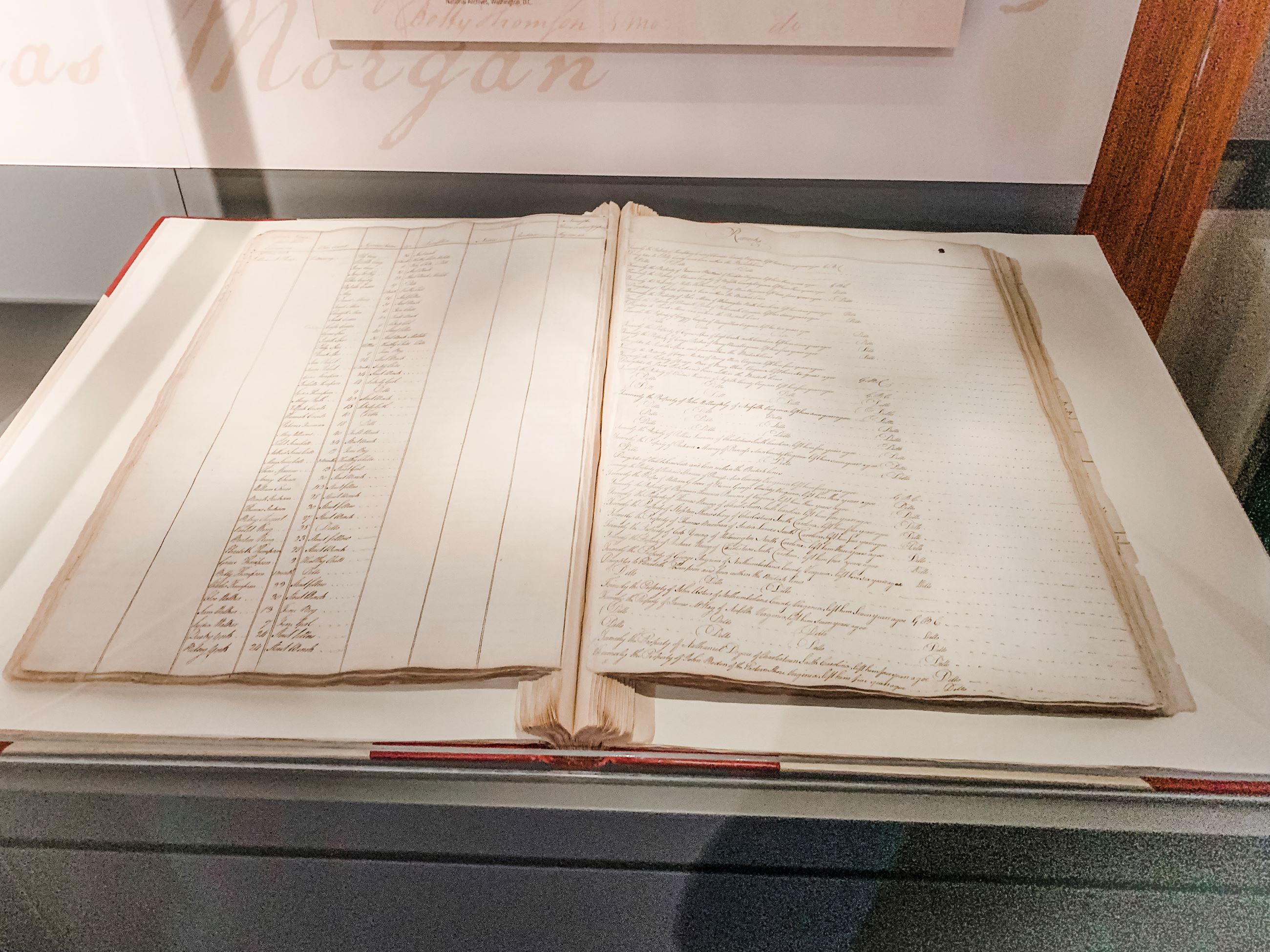 Whether enslaved or free, African Americans took advantage of any opportunity that allowed them to improve their lives during the war—often choosing to support whichever side offered their best chance for freedom and citizenship. Some decided to fight for the British while others appreciated the ideals of patriotism.

That brings us to what we consider the next most powerful artifacts—and they’re being reunited in this exhibition for the first time since the 18th century. Right. Here. In. Yorktown. How cool is that? 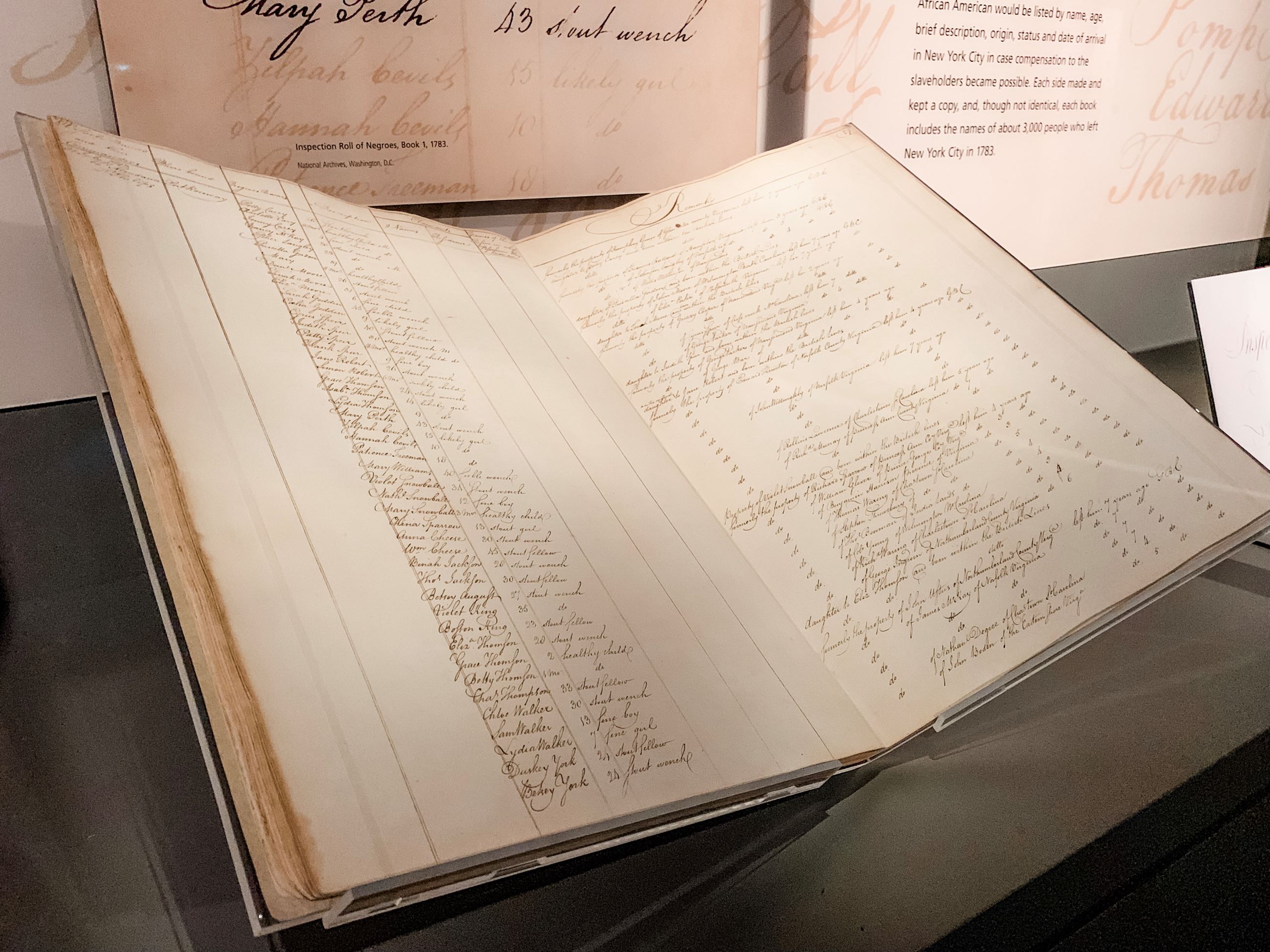 They stem from the Treaty of Paris, the official peace agreement after the war, approved by the Continental Congress. The Treaty essentially restored peace between America and Great Britain. But there was a hitch. Part of the language in the treaty led to uncertainty about the terms regarding those who had escaped slavery and taken refuge by joining the English army. Virginia’s own royal governor, Lord Dunmore, had promised freedom to all enslaved African Americans owned by rebelling Patriots if they would serve and bear arms with loyalty to Great Britain. And many made that risky choice. But what should happen to them now that it was the Patriots who’d secured victory?

Article 7 (also on display and on loan from the U.S. National Archives) stipulated that all prisoners from both sides were to be freed and the British were to withdraw all of their forces “…without causing any Destruction, or carrying away any Negroes or other Property of the American inhabitants.” 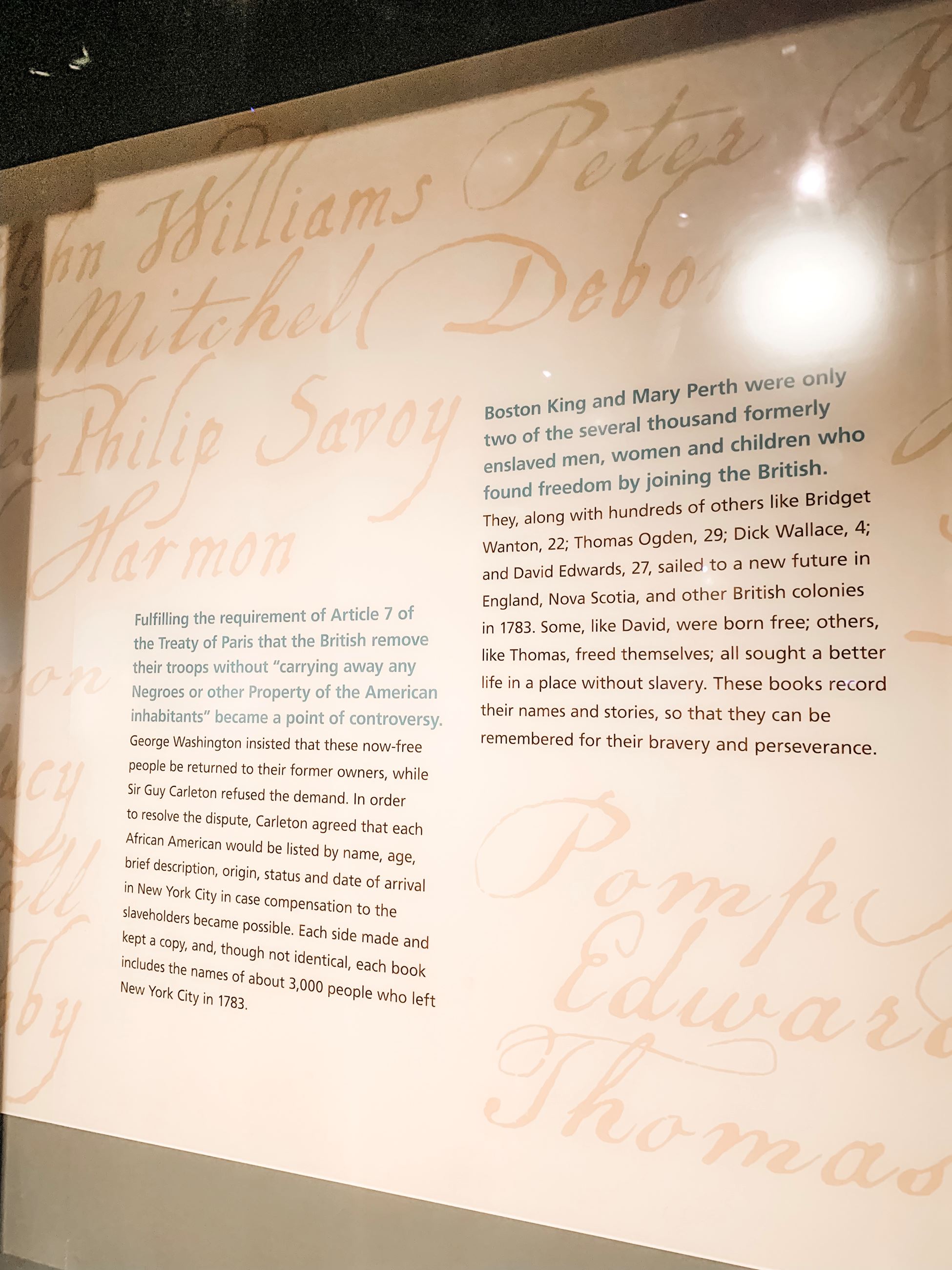 George Washington insisted these now-free people be returned to their former owners, but Sir Guy Carleton refused that demand. The compromise? Those African Americans could leave through New York City, but each one had to be documented by both sides. In the information captured, they had to include the name of all former owners and when they fled slavery… safeguards should compensation ever be granted to the slaveholders one day.

Martha Katz-Hyman, Assistant Curator for the Jamestown-Yorktown Foundation, asked us to put ourselves in the place of the thousands who lined up in April of 1783, awaiting their ticket to freedom.  “Imagine them standing there—men, women, children. Some who were born free, some who ran to the British escaping slavery—all want to go to a place where they would have a better life, where there was no slavery, and that’s what these books are. This is the first time, I calculated, in 238 years these books have been together again.” 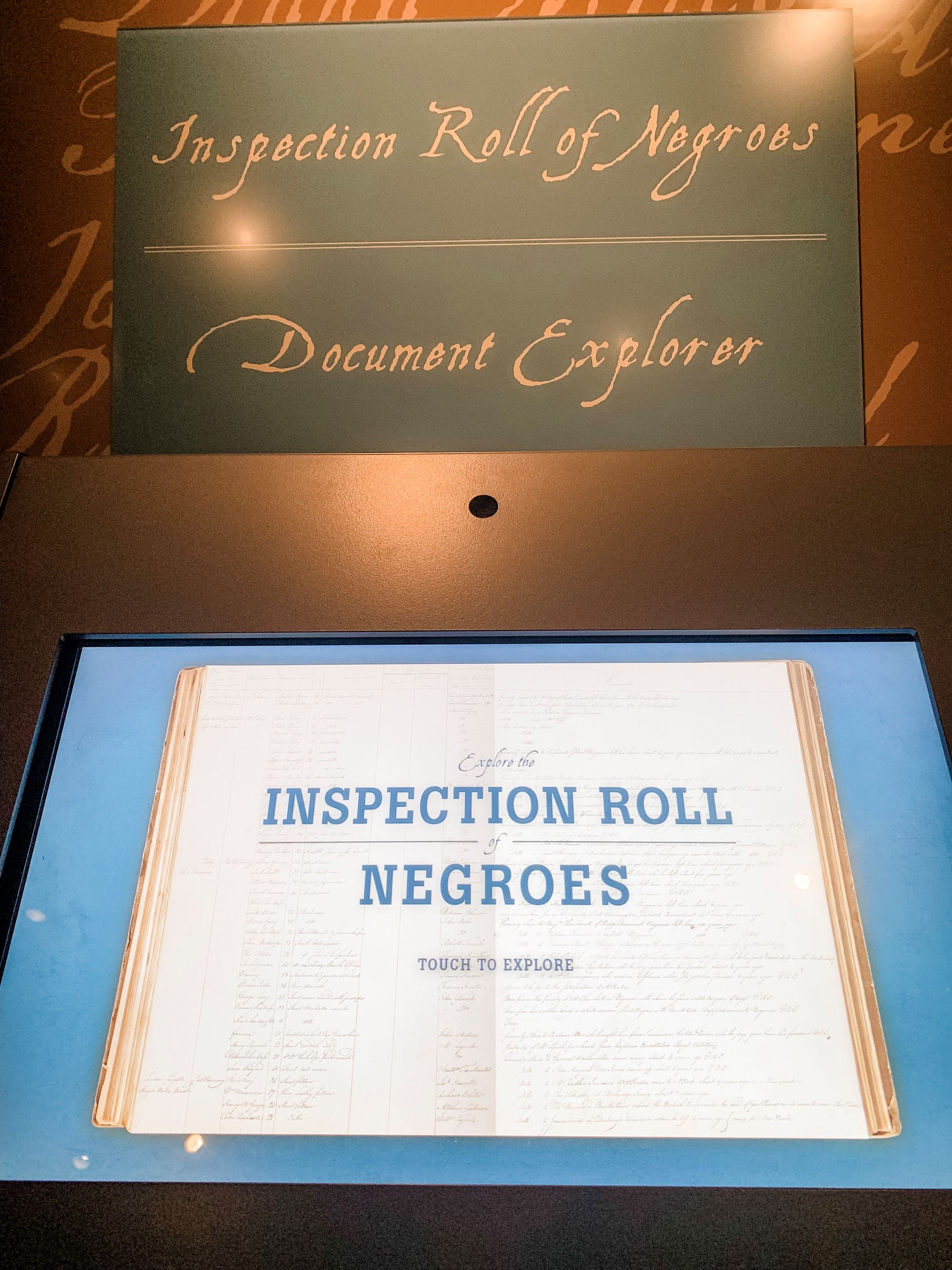 Each page serves as a way to remember their bravery and persistence. A supplemental interactive component to the exhibit allows you to actually zoom into the pages and read more. I found it powerful to note that while we were told earlier in the tour most slaves during this time were known simply by their first names—in this book, written in meticulous script, you can identify individuals by both their first and last names. A chance for their full identities to be recorded in history forever.

While each side created its own copy—the two books aren’t quite identical. Though they do contain the names of the close to 3,000 African Americans. 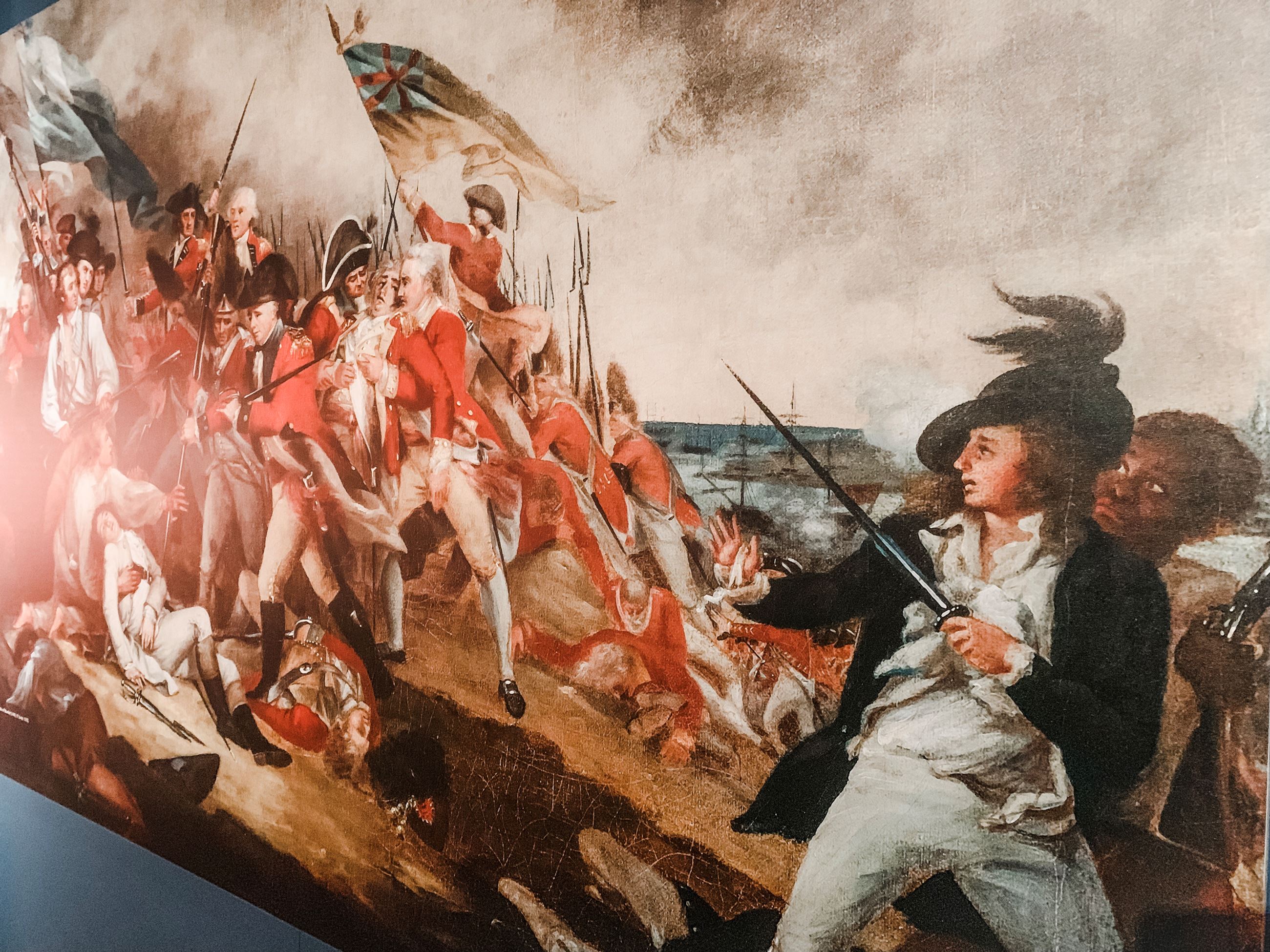 The final element of this exhibition we want to shine some light on is Lieutenant Thomas Grosvenor and His Negro, on loan from Yale University Art Gallery’s Mabel Brady Garvan Collection. It was completed by American artist John Trumbull and depicts the death of Joseph Warren during the Battle at Bunker Hill.

In the larger painting—you barely notice the face of the African American man hiding behind his master. But he’s there, in the bottom right corner, pistol in hand… a look on his face that’s open to interpretation and warrants discussion. The oil painting beside it, also by Trumbull, provides a zoomed-in perspective bringing the enslaved man, believed to be Asaba—from the background, to the foreground. 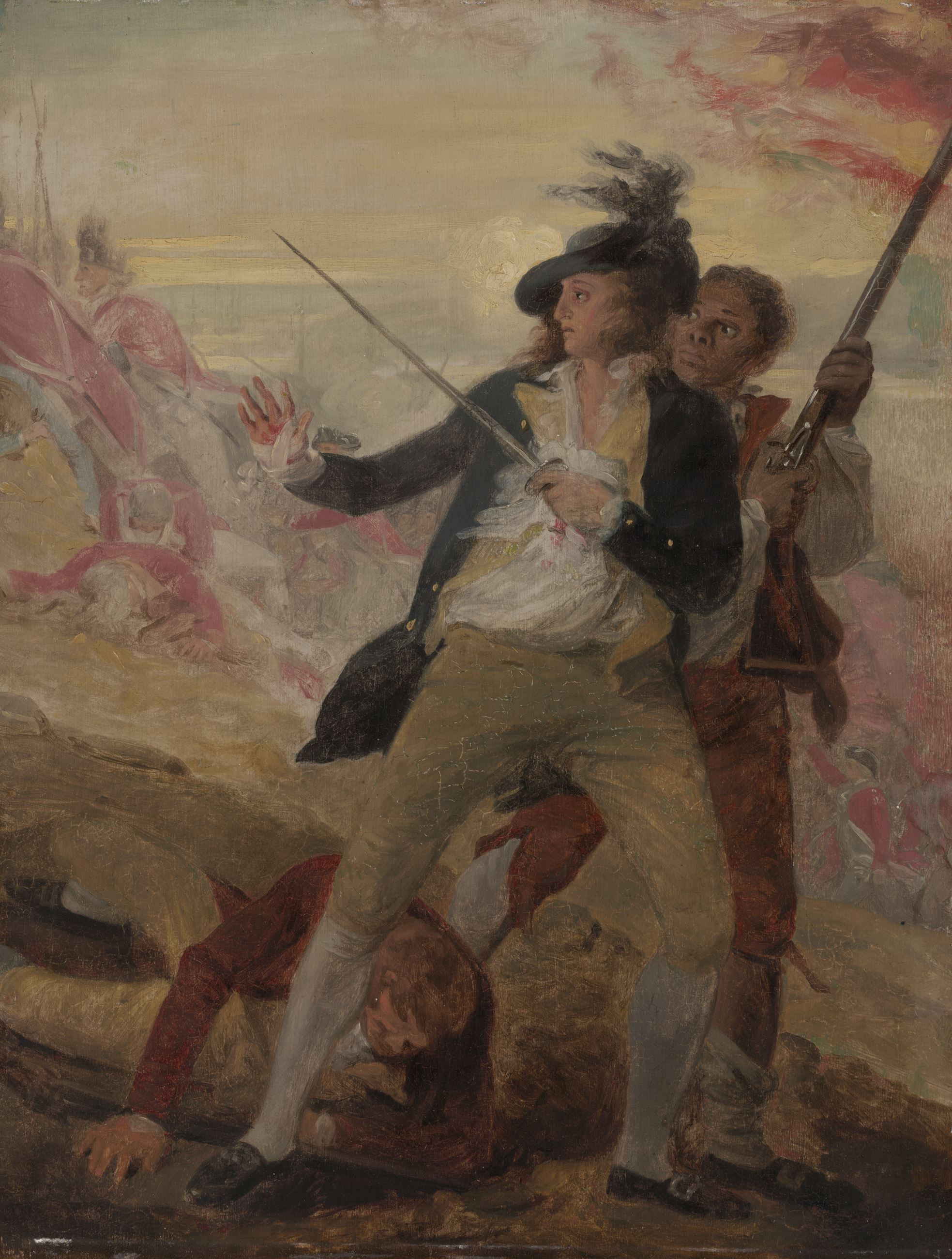 “Is he afraid? Is he horrified by Warren’s death? Will he be next? He wasn’t the only African American at the Battle of Bunker Hill but… he is a face of a human being at war. If you look at this painting up close, up personal, see the humanity in this face. He was probably taken to war involuntarily because he was Grosvenor’s enslaved servant and he had no say where he was going to go. Probably going to defend Grosvener but he’s there participating in the war,” shared Katz-Hyman. 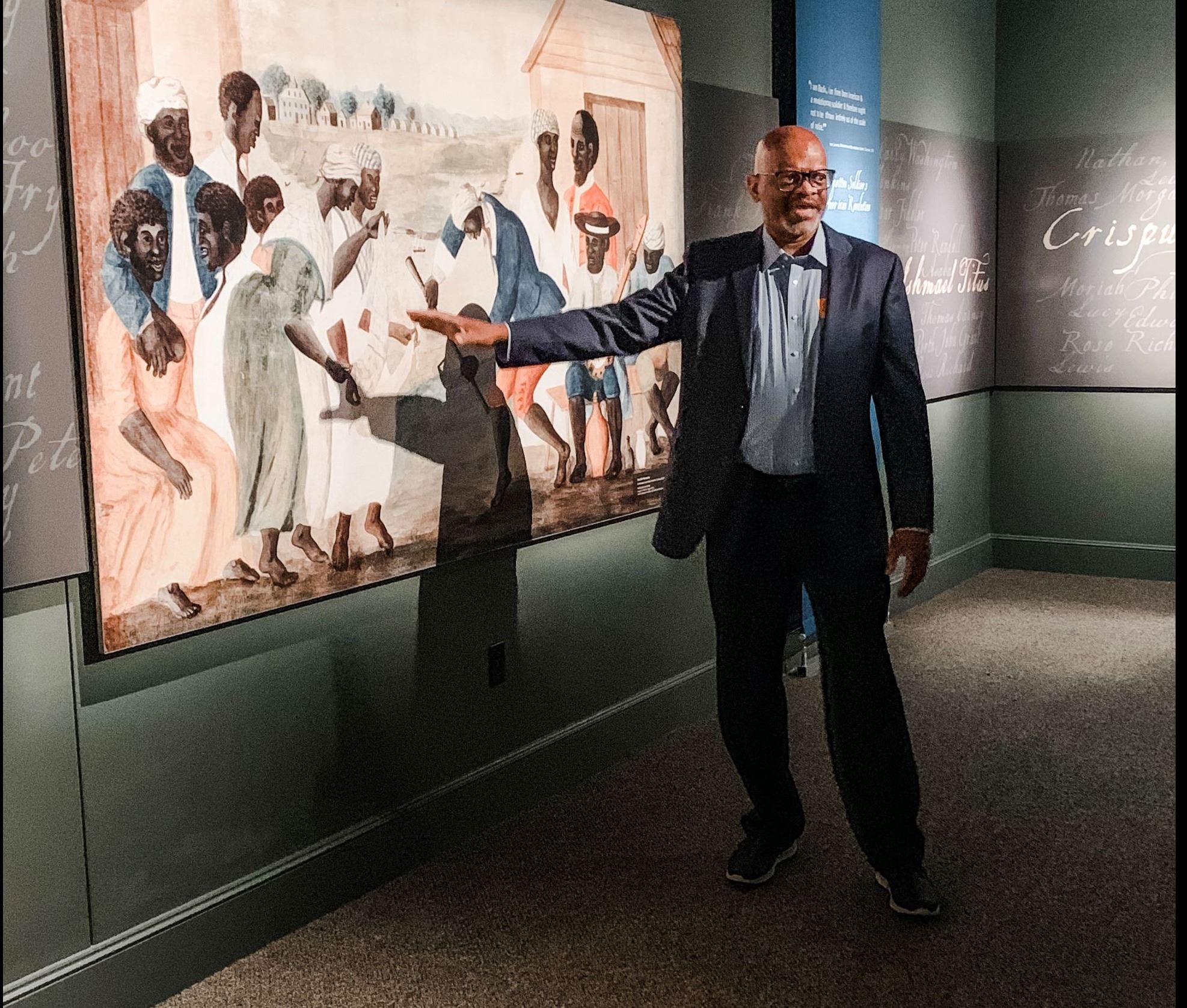 These three particular elements of the exhibition happen to focus on the period during and after the war, but when you first enter the gallery, you’ll be introduced to life for the African Americans leading up to the American Revolution. Harvey Bakari, a consultant for this exhibition and former manager of African American Initiatives at Colonial Williamsburg, put their mindset in perspective. Groups of enslaved residents presented petition after petition to the legislature asking for their freedom. They understood enslavement was incompatible with the ideals of independence being fought for around them.

“One of the petitions written in 1723 in Boston said… We have no wives. We have no children. We have no country. People have to feel like they belong somewhere. Even if you’ve been kidnapped from your homeland... Many of the free blacks and enslaved who are not first-generation Africans, this is their home but their home rejects them. Their home says they’re property. But the American Revolution offered an opportunity for people to make different choices, and that’s what the theme of this exhibit is all about.”

Remember—admission to the Museum is free for all York County, James City County, and Williamsburg residents! The exhibition opens June 29 and runs until March 22, 2020.

Learn even more here, including detailed descriptions of all the significant loans from museums, national archives, and private collections.

Featured in this Blog

The American “Inspection Roll of Negroes No. 1” and the British “Book of Negroes,” on loan from the U.S. National Archives in Washington, D.C., and the National Archives (Public Record Office), Kew, London, England, will be reunited for the first time since 1783 for this special exhibition. The Americans and the British created these two documents to partially satisfy a requirement of Article 7 of the Treaty of Paris. These ledgers record the names of approximately 3,000 African-American men, women, and children who escaped to British lines during the war in hopes of obtaining their freedom. An interactive in the exhibit will offer an in-depth exploration of the “Inspection Roll of Negroes Book No. 1” from the U.S. National Archives.

“Lieutenant Thomas Grosvenor and His Negro Servant” portrait by John Trumbull, circa 1797, on loan from Yale University Art Gallery, Mabel Brady Garvan Collection. In this 15-by-11 inch oil painting, Asaba and his owner, Lt. Thomas Grosvenor of Pomfret, Conn., look at the fallen hero, Dr. Joseph Warren, who was killed at the Battle of Bunker Hill in 1775. Asaba survived this battle and was freed by Grosvenor after the war.