An Insider's Guide to Independence Day in Yorktown

Fireworks, hot dogs, live music, sandy beaches, and good ‘ole patriotism—can we count you in this Fourth of July? There’s no better place to spend the holiday than in the very spot where Gen. Cornwallis raised the white flag more than 200 years ago. Throughout the day you can enjoy the many scheduled events outlined below, or simply kick back on the beach, visit local shops, and explore museums. So spread the word to family and friends, and help make Yorktown’s 40th Independence Day Celebration the most spectacular one yet! 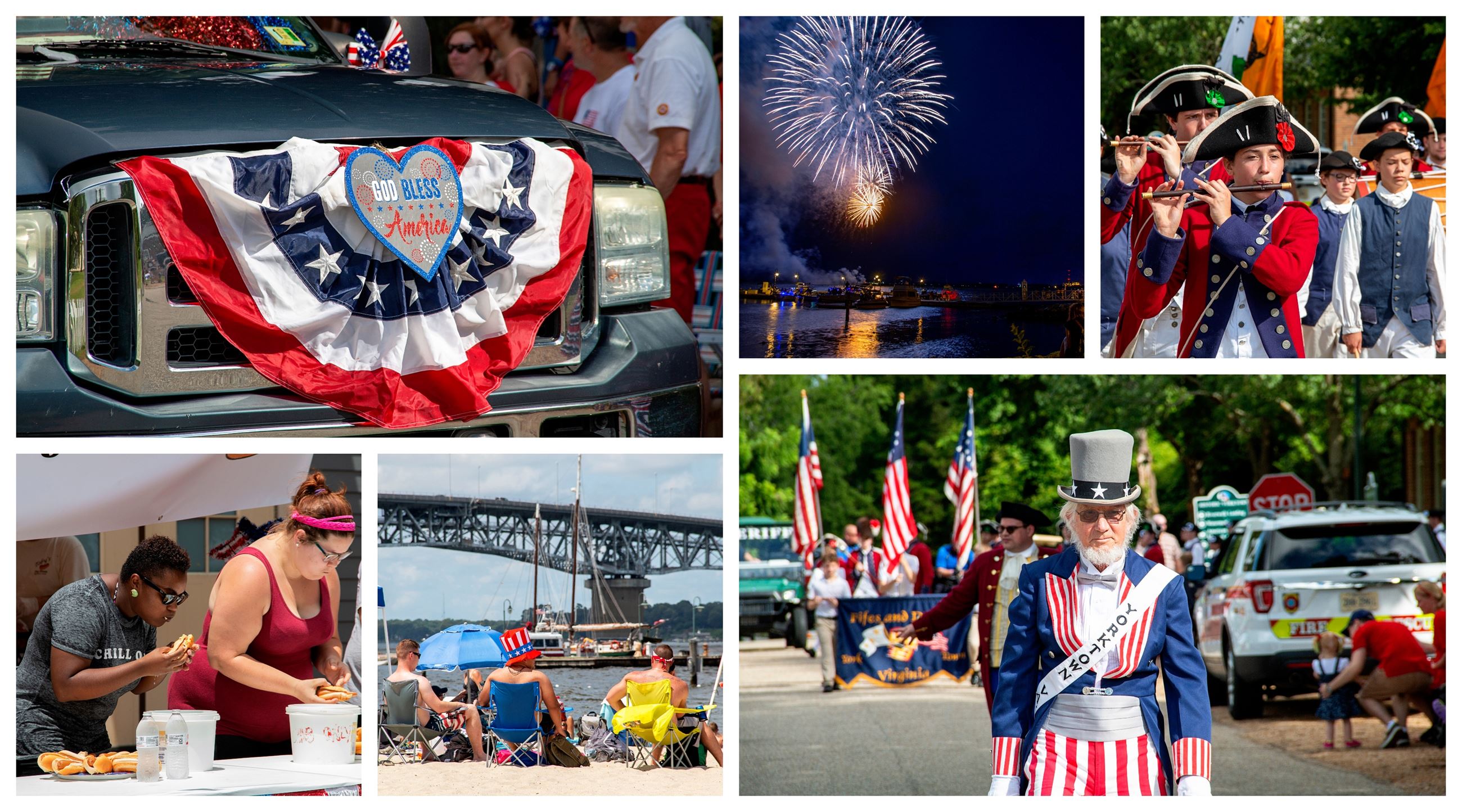 Summer’s best outdoor party begins bright and early at the 10th Annual Independence Day 8K and 5K Run/Walk. Sport your red, white, and blue and run in the same footsteps of the American and French allies who won the last major battle of the American Revolutionary War. 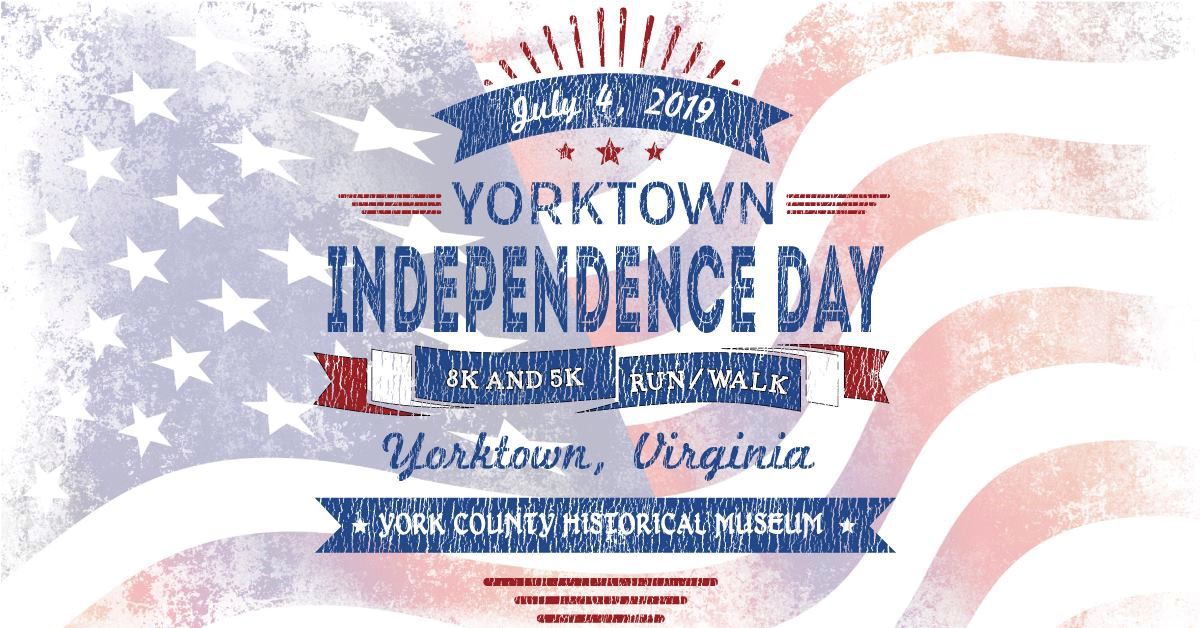 You can register for either the 8K Run or the 5K Walk with projected courses along the tree-lined tour roads, in the shadow of Surrender Field. The 8K starts promptly at 8 a.m. and the 5K begins ten minutes later. Both routes start on Historical Tour Road in the Battlefield just past the George Washington Memorial Highway (Route 17) overpass. The 8K loops the Battlefield and finishes beyond Surrender Field. The 5K runs out onto Historical Tour Road, turns around midpoint, and finishes back at the starting line. 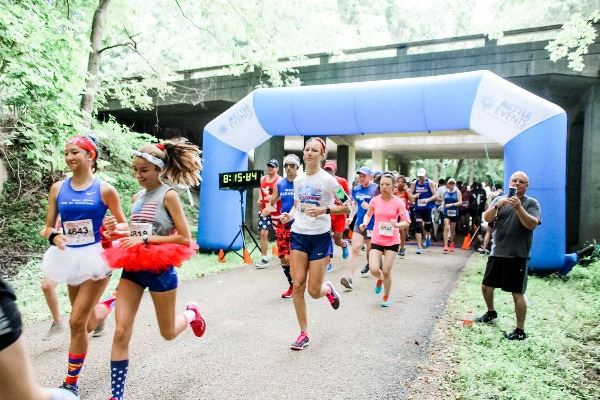 It’s a good idea to pre-register, and you can do so by clicking here. The cost is $40 ahead of the race and $45 the day of the event (race T-shirts are only guaranteed to those who registered by June 15). All proceeds benefit the York County Historical Museum, a volunteer, nonprofit organization. Many volunteers are needed to make this year’s event a success, so consider offering your help if you are able. You can sign up by clicking here. 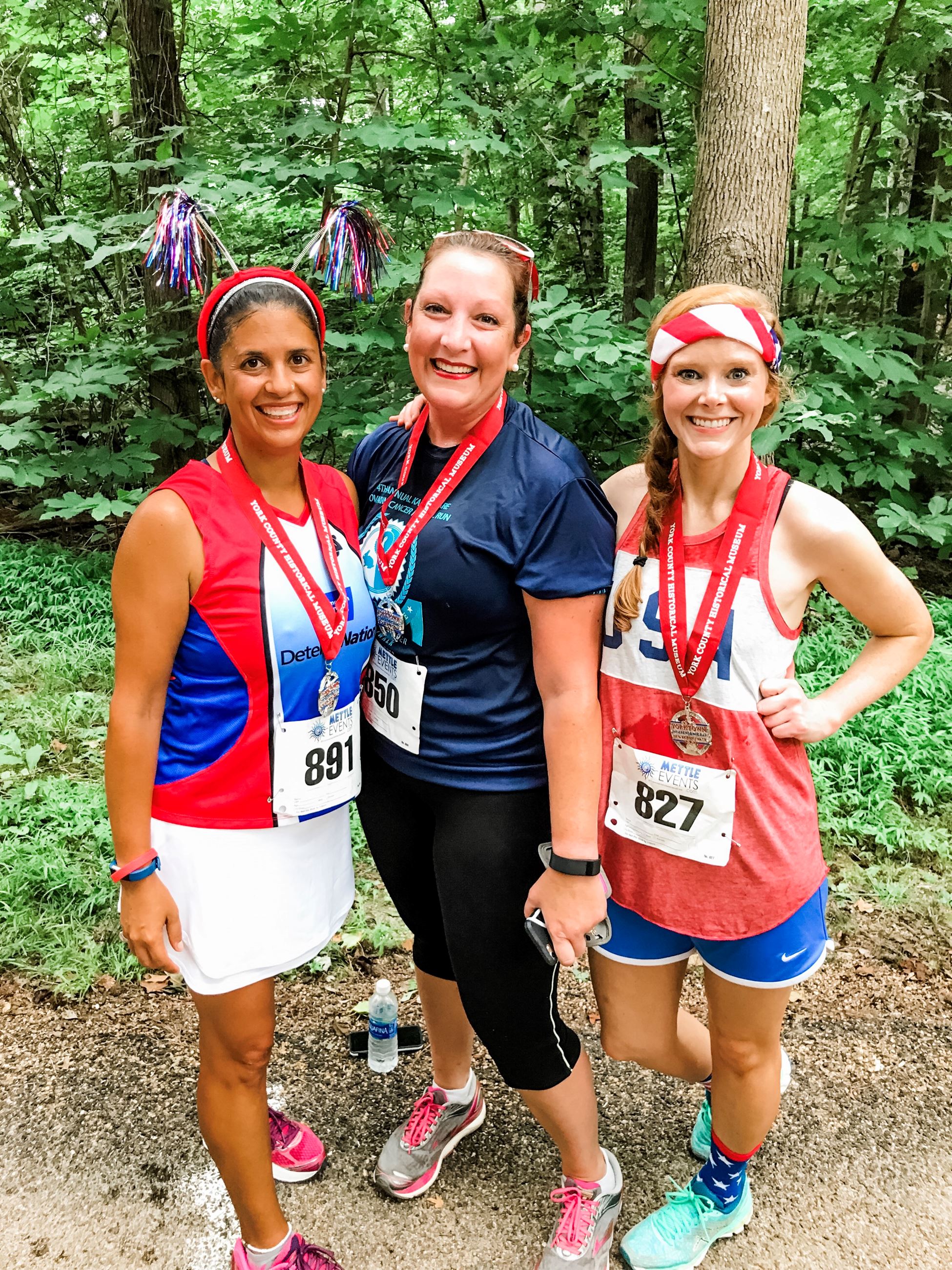 Early packet pickup is available Tuesday, July 3, at Water Street Grille from 4 p.m. to 7 p.m. Race-day check-in/late registration begins at 7 a.m. at York High School. Awards will be handed out to the top three men and women in each age group. 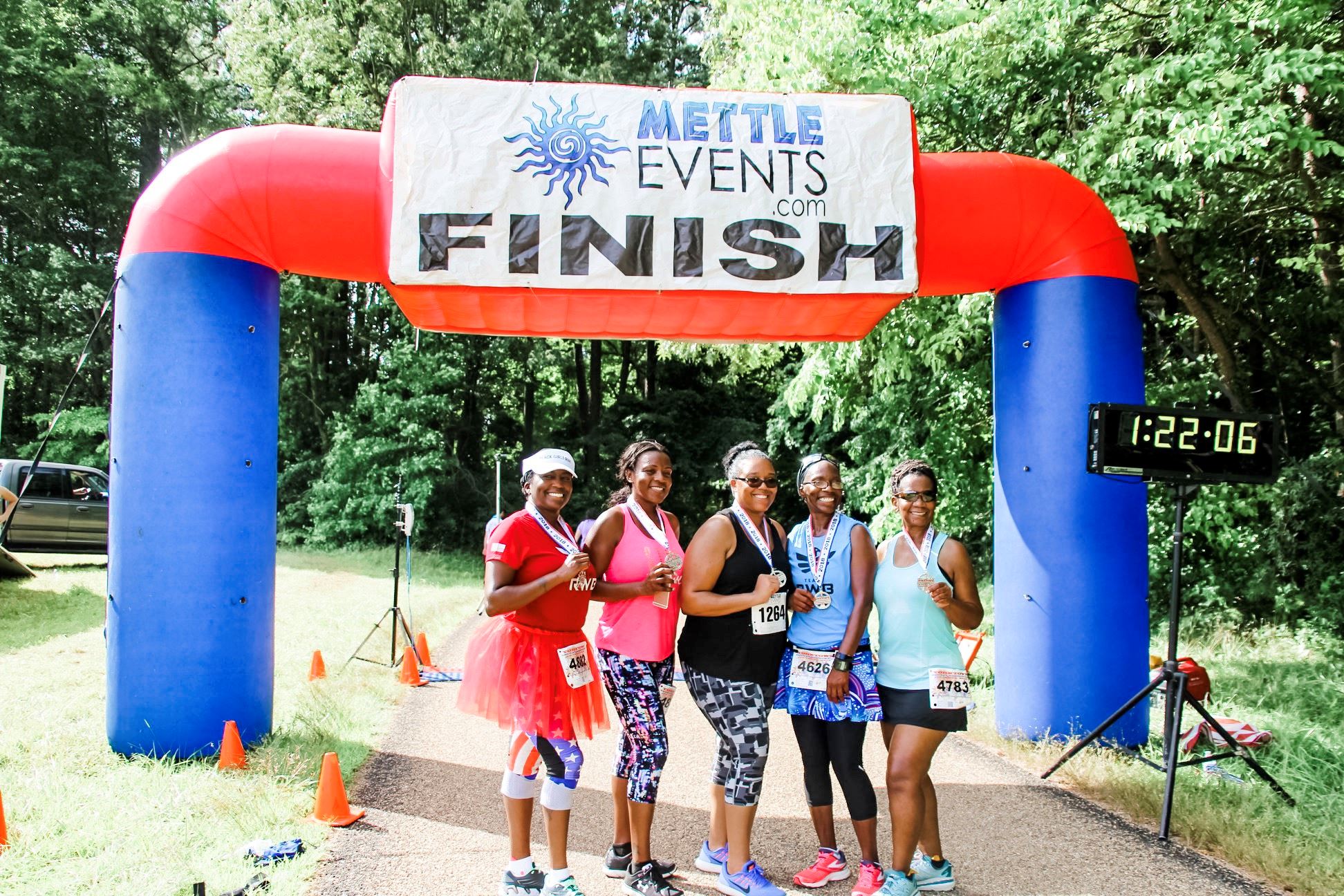 It wouldn’t be the Fourth of July without a celebration through the streets of Historic Yorktown! The route steps off in front of the Archer House on Water Street and makes its way down Water Street to Ballard Street, where it turns up the hill, and then takes a left onto Main Street, ending at the Victory Monument. You’ll love hearing music from the U.S. Coast Guard Training Center Ceremonial Band Yorktown at Victory Monument. Throughout the parade route, enjoy appearances by groups of musicians, politicians, civic groups, and performers wave to the crowds and pass out flags.

In the afternoon, gear up for free family-friendly fun at Riverwalk Landing. The kiddos can get their faces painted, play patriotic games, and do U.S.A.-themed crafts. And don’t miss the hot dog-eating contest presented by Toby’s Dog House! Each competitor will have seven minutes to pummel as many hot dogs (buns included!) into their mouth as they can. The big prize is a year of free hot dogs at Toby’s Dog House and a Toby’s T-shirt. 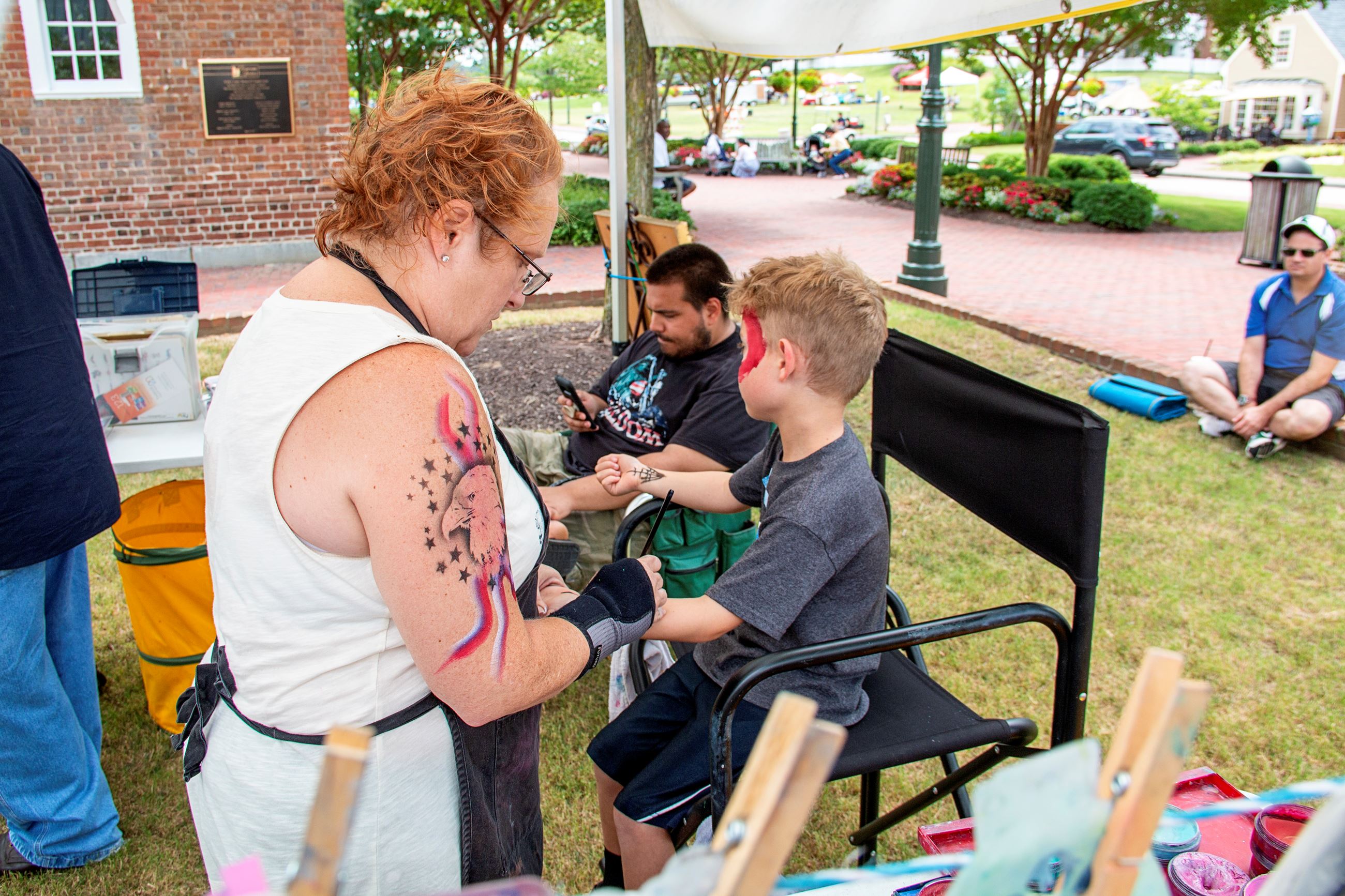 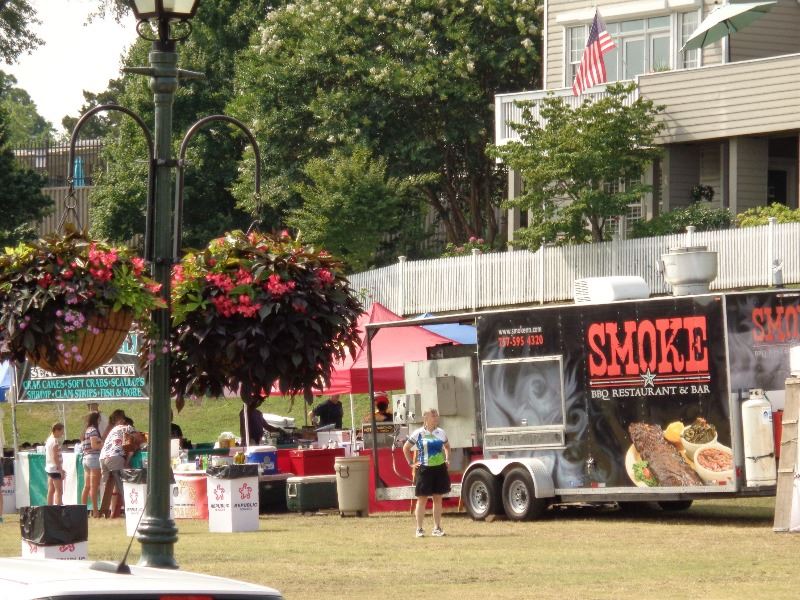 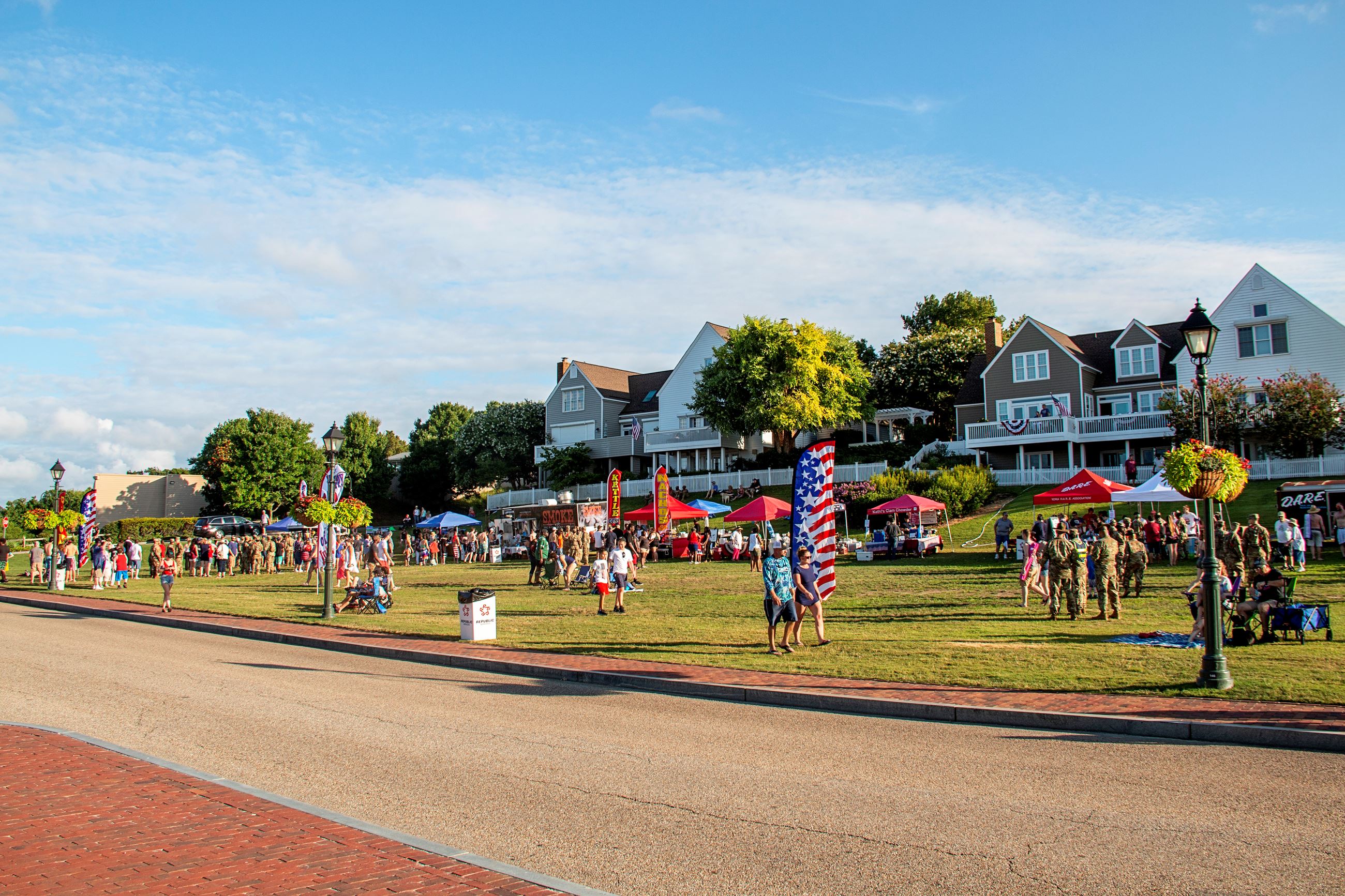 Every Independence Day, after the reading of the Declaration of Independence, the York County Historical Museum holds a symbolic and historic program that's been a community tradition here in York County for decades. First comes the acknowledgment of all 13 colonies, along with the original signers from the Second Continental Congress who together formed the United States of America. The Fifes and Drums of York Town kick off the event at the Riverwalk Landing Performance Stage and each year a different child from the audience is bestowed the very special honor of ringing the bell. Following the historic program, Super Jazz Band featuring Conni Ironmonger will take the stage to perform a patriotic concert leading up to the big fireworks finale!

Finally, it’s time for the sky above the York River to come alive! You should be able to see the fireworks anywhere at the waterfront. The show starts at 9:15 p.m. and lasts about 15-18 minutes. Some of the fireworks will shoot up to 800 feet into the sky. Just to put that in perspective a little, the Washington Monument in D.C. is 555 feet tall! 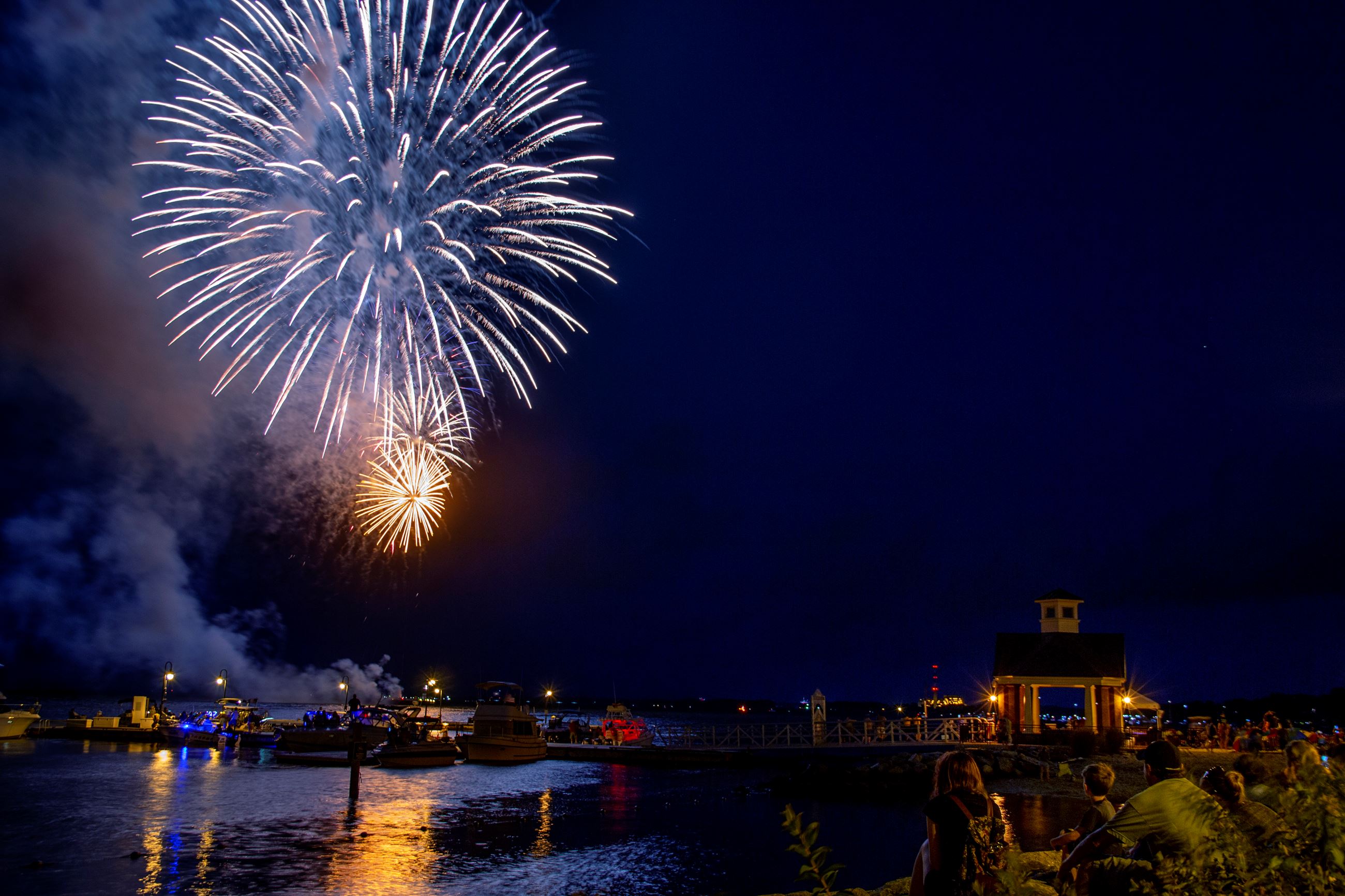 Liberty Celebration at the American Revolution Museum at Yorktown

You can also salute the red, white, and blue at the American Revolution Museum at Yorktown. From 9 a.m. to 6 p.m., visitors can enjoy interpretive programs, military drills and artillery demonstrations, and learn about the challenges that faced our nation’s founders. Additional tickets are required for non-York County, James City County, and Williamsburg residents. Learn more here. 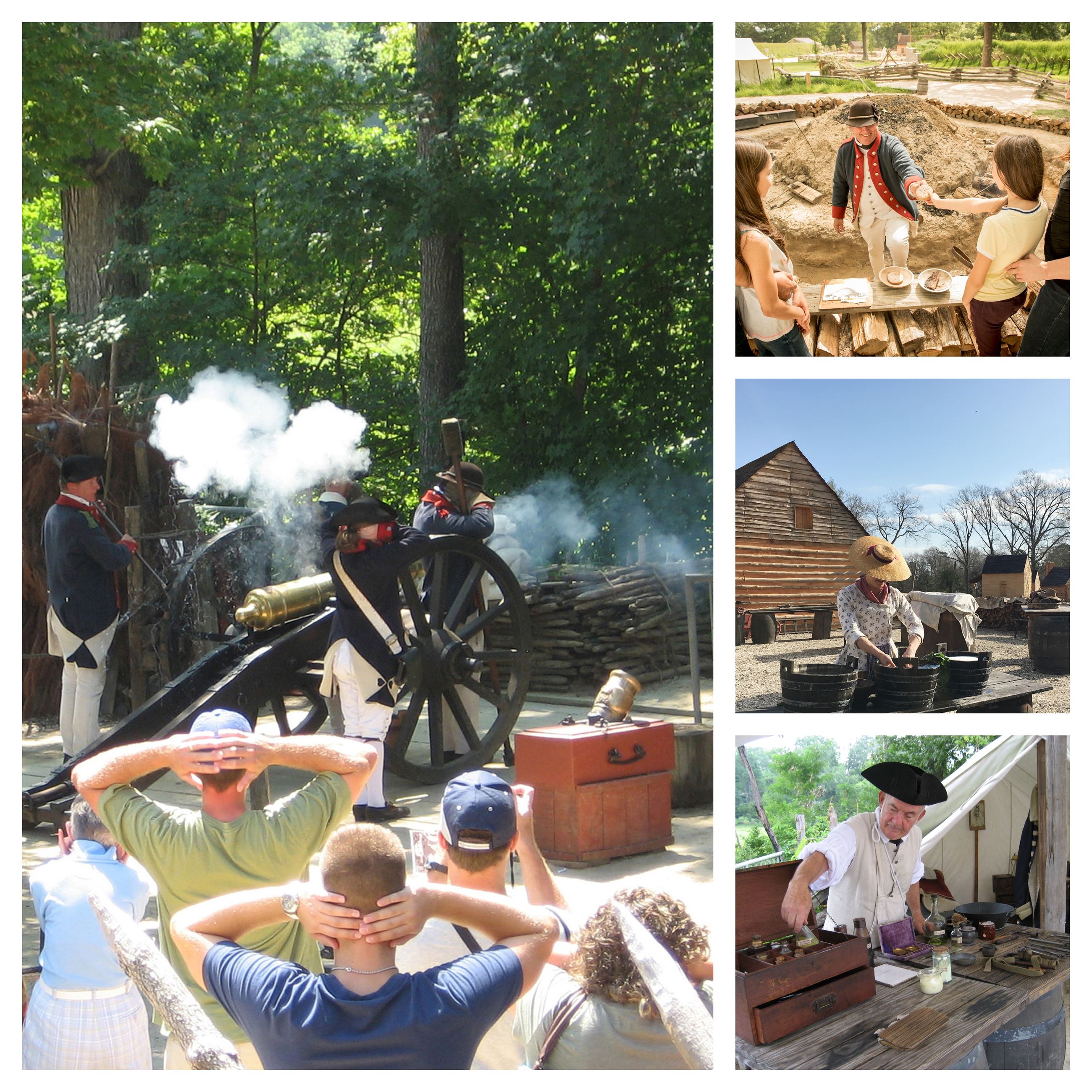 Beginning at 4 p.m., unless you are a Yorktown Village resident, Riverwalk Landing business owner, or have an official pass—you will not be able to park in Historic Yorktown. Visitors attending the evening activities must park on the Yorktown Battlefield at the corner of Cook Road and Ballard Street which can be accessed by Cook Road or the Colonial Parkway. The Battlefield will remain open to the public until it reaches capacity. We want to let you know that the walk from the Yorktown Battlefield to the waterfront is about one mile and includes hills and uneven terrain.

The Yorktown Trolley, the only form of public transportation in Yorktown, will run from approximately 10 a.m. (following the parade) until 5 p.m. It’s not only free, but it’s air-conditioned, handicap accessible, and includes several convenient stops:

All-day street traffic blockades include: Zweybrucken Road, Comte de Grasse Street, and Main Street (from Zweybrucken to Ballard). The Beach Picnic Area will also be closed to vehicular traffic. Pedestrian traffic only. Church, Nelson, Smith, and Bacon Streets will be restricted to residents only.

Please note: Yorktown will be closed to incoming traffic for about an hour after the fireworks show has ended.

Handicapped Parking and Special Assistance: Transportation will be provided from Yorktown Middle School from 4 to 7 p.m. for those with disabilities and special needs, as well as one designated escort. You must be on site and checked in by 7 p.m. to get a ride. It is important to note that once the shuttle parks at Riverwalk Landing, from 7:30 to 9:45 p.m., it will not make runs until after the fireworks show. 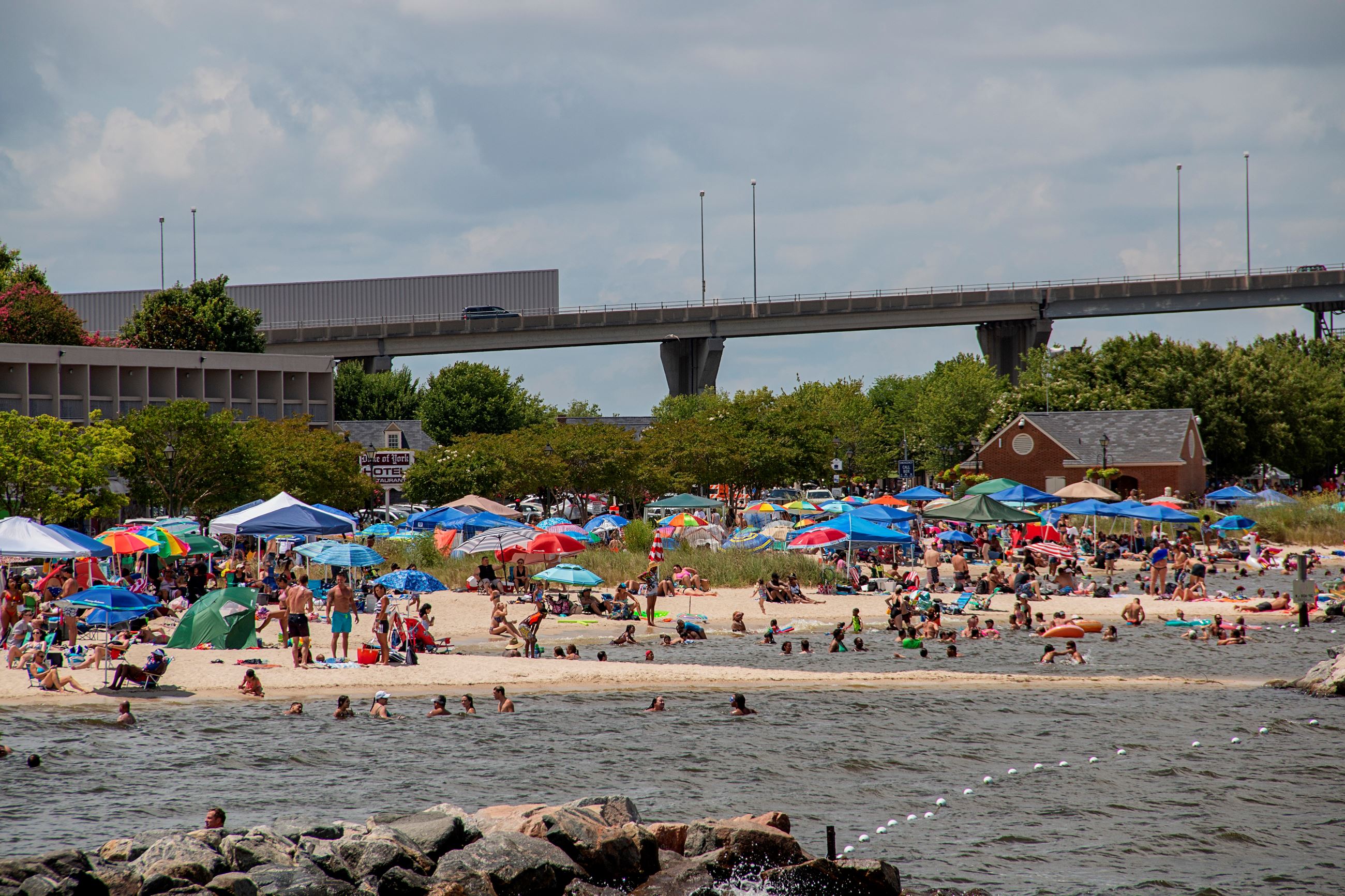 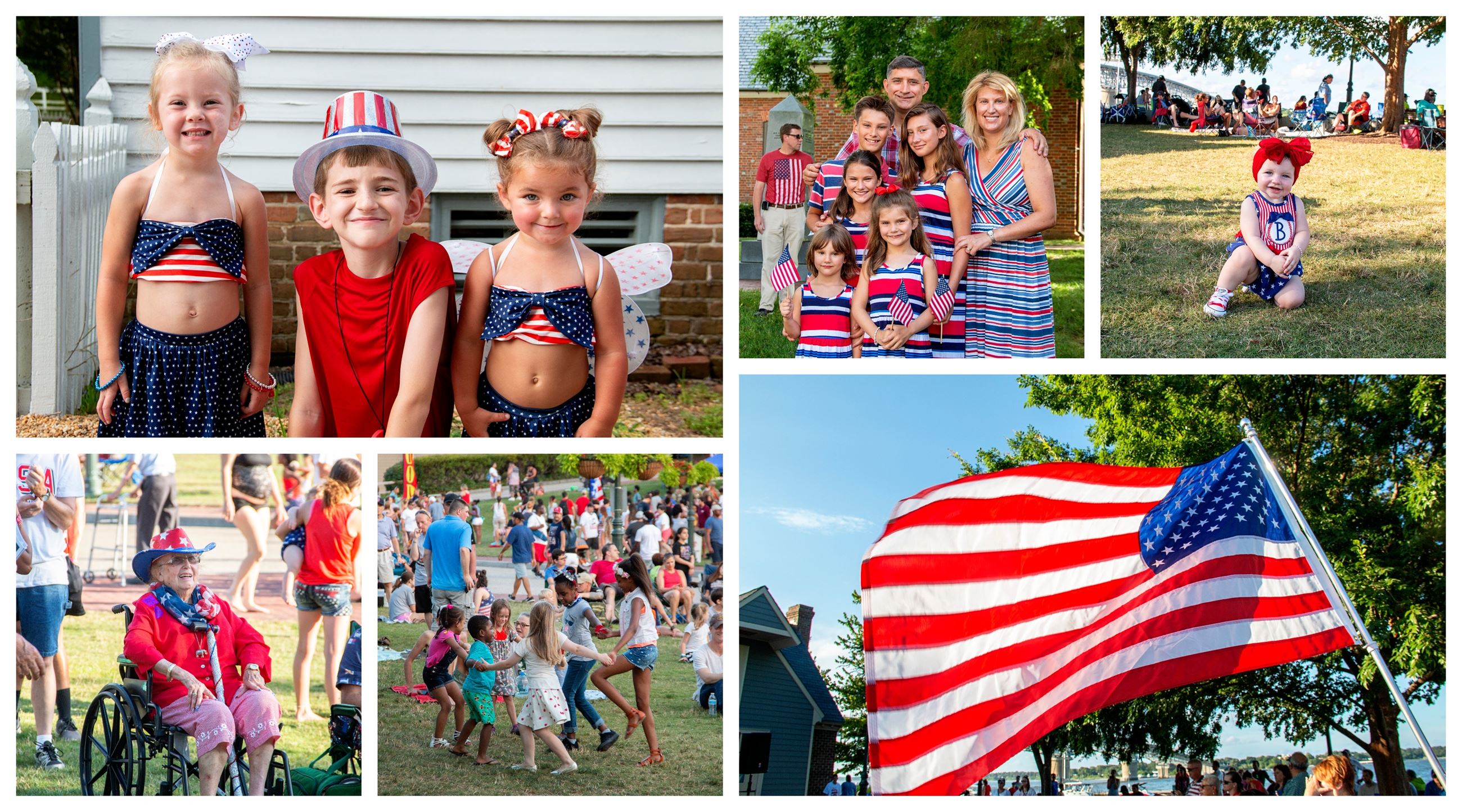 We hope you have a fun day with family and friends enjoying all Yorktown has to offer. Please be sure to tag @visityorktown and use #visityorktown in your pictures on Facebook, Instagram, and Twitter. 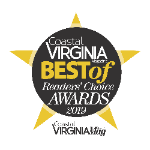